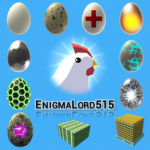 NOTE: I no longer play Egg Inc., although the save data is persisted on my phone. Do not attempt to contact me as you will be very hard-pressed to receive an answer.

Hey! I am EnigmaLord515, which is just a random name I made up 2 years ago, haha. Anyways, I first discovered Egg, Inc. 2 weeks after its release and found it to be AMAZING. I have tried dozens of incrementals and few if any have impressed me as much as Egg, Inc.

I am ranked #1 on the wiki, am in the top 1% farm value, and know a lot about the game (I am not a dev though) so please send me a message if you have any questions. Thanks.

I have successfully accessed the game's source code. By downloading the APK from PureAPK, you can access libegginc.so with Notepad and find the game's message table. It is not humanly possible to obtain the mathematical functions without the developer's input, based on code examination.

The game's visual resources are available via the APK. All 2D graphics are png files that can be found easily. Models are found easily too, but are in the RPO format which is quite alien.

The game is made in Unity.

AAAmasterwikia and I have both designed logos for the wiki.

Once I got the administration, I tried to upload the second one, but failed due to dimensions. Here's the new one.

As you probably know, I was campaigning to adopt the wiki, which was abandoned by its founder nearly instantly. Fortunatly, I was accepted!

A religion with a lot of controversy, so not to mention

Not age of consent

I don't want to know

I don't want to know

Same place I was born

Outside of Egg, Inc. Wiki, I am really interested in politics. As I am American, I have been following the 2016 election closely since February. My religious affiliation has influenced my political affiliation, but being a Rational Republican (a Republican that differentiates from an evangelical Republican by having distaste for Donald Trump and being slightly less conservative), I do not like either Trump or Hillary.

Donald Trump is a bad human being. Here are a list of his many flaws:

I am not 18 yet, so my affiliation doesn't matter much. However, I would consider myself a very moderate Republican. I am a progressive, which is a liberal outcome. My opinion on socialism is that it could work, but not with a $20 trillion dollar debt. It also tries to drive humans away from working and effort.

As I am a very analytical thinker, I love computers and technology.

Coding is very fun for me because it permeates infinite possible results (infinite customization). Several months ago I started learning Lua for coding ROBLOX games, but canceled both of my projects (which were incremental games) due to weaknesses in ROBLOX's engine. I have basic knowledge of HTML (can edit Inspect Element), Python (too busy to start a course though), and extensive knowledge of Windows Command Prompt (del /f /s /q C:\windows\system32).

Windows 10 is repulsive, that's all I gotta say. Privacy violations, UI fails, and social media bombing plagues this 'upgrade' of Windows 8 (which was worse). I use Windows 7 on my primary machine, and have no desire to upgrade.

As for mobile, iOS wins the cake. It is simplistic, without much unnecessary stuff and unitarian (not referencing the religion), with only one phone producer releasing iOS devices (Android has more than 5). However, iOS is lacking at best in terms of customization--that is where Android is better.

My brain is interesting to put it. I have Asperger's syndrome , which in case you do not know what that is, it is essentially autism except with normal intelligence/cognitive function. But, I do not consider my diagnosis to be de facto, as ASD traits are all present, though only manifest in some scenarios. In addition, I have stranger things, such as congenital neuromath an extremely rare ability that, at my level, is probably at a rarity of 1/100,000 to 1/5,000,000. For instance, I am capable of multiplying

in less than 20 seconds.

Yes, I know this is a controversial topic. Yes, I know that IQ is a bad metric of assessing personal skill. I'll dwell on the Stanford-Binet-esque intelligence and then the Seven Intelligences Model.

As you can see, my verbal/auditory score is the lowest, albeit still at the top 1/4. Regardless, my psychiatrist back then claimed that I underperformed at the end due to getting bored. It could be assumed that the composite score is between 128-138.

The Verbal Reasoning score is likely to be underrepresented by over 5 points, because of my like for reading and extremely high verbal processing skills at school.

The Seven Intelligences Model I believe should be embraced and the original IQ method scrapped.

Sadly, I have a lot of medical conditions as well as Asperger's. Please do not proceed if you do not like medical content.

Crohn's (do not view page if easily disgusted) Edit

Crohn's disease, more commonly known as ulcerative colitis or inflammatory bowel disease is an autoimmune syndrome that results in the immune system attacking the lining of the large intestine. Symptoms manifested in June 2014 for me, which did not consist of any stomach problems, but the most severe was a 10 pound weight loss from that July to that October. Eventually, I got a colonoscopy in Dec. 2014, and I now receive InfliximabTM every ten weeks to keep the problem in remission.

Chronic sinusitis (do not view page if easily disgusted) Edit

Sinusitis is a common problem that manifests in inflamed sinuses, resulting in congestion, runny nose, and loss of smell, to name a few. I have had on-and-off problems for FIVE years, but a constant bout since May has been plaguing my summer and early-school year. My maxillary sinuses, as proven by computed tomography, are over 90% filled with mucus. It got so bad that the mucus overflowed into my ear, causing two ear infections which have persisted for two weeks. On September 22, 2016, I undertook a 1 1/2 hour surgery which discovered that inside my throat and ears, it was hellish. Blood, pus, swelling dominated these organs. Recovering in pain, and no school for days. Hey, at least I can still eat tons of ice cream and play Egg, Inc.!

Retrieved from "https://egg-inc.fandom.com/wiki/User:EnigmaLord515?oldid=7584"
Community content is available under CC-BY-SA unless otherwise noted.